The 7 Liberal Arts - Trivium and Quadrivium

In my free book (which I am currently also translating into English) I describe the history of the western educational system, which has been intentionally degraded over the centuries and has today reached almost rock bottom in terms of enabling children to use their own brains. You can easily pull school tests from the 1800´s from the net and you will find that for instance the math that is being taught in “high level performance classes” to “gifted” 18-year olds in western (e.g. German) schools today hardly matches what used to be taught to the average 12-year old elementary school kid in 1880! Both teachers and students have been degraded to an almost unthinkable intellectual level, from the point of view of just 150 years ago.

Especially over the past 60 years citizens of western industrialized countries have been literally assaulted through an education-driven, psychological warfare program. Along with the increasing concentration of mass media, the increasing influence of behavioural science on educational practices (research Pavlov experiments, Dewey/Wundt system), the indoctrination of leading research institutions combined with the ever more sophisticated government censorship, deliberate disinformation and scientifically developed propaganda (research Tavistock Institute), our public educational systems have incrementally adopted more and more elements of scientific mind control techniques, hypnosis and behavioural science. 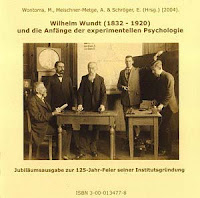 Wundt system carried to the USA by Dewey

According to John Gatto (read John Taylor Gatto: ’Dumbing Us Down. The Hidden Curriculum of Compulsory Schooling’) today’s school system achieves the following (some thoughts added by myself):


In a soft way the combination of these effects enable the effectiveness of PR, advertisement and propaganda, in the most dangerous way an increased predisposition to the influence of a demagogue or a potential dictator. Our ‘modern’ school system debilitates the power of intellectual supply and demand, and this is true not only for goods and services, but also for ideas and creativity.

Through scientific propaganda techniques, politicians today are able to evade criticism of the populace by engineering public opinion (e.g. through manipulated polls). It is possible to create societal demand for useless products, such as grossly overpriced branded sneakers, that provide no additional benefit over regular sneakers. Industry and politics can solicit the population with overpriced merchandise and shallow ideas and psycho-scientifically create consumer demand. The trailblazer for such a society is the Prussian educational system – a rather unknown German export success. 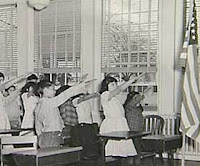 So if today´s educational system is literally a dis-ease to society, infecting the minds of the young ones, then what is the remedy? Here is the good news: we don’t need to re-invent the wheel! All we need to do is go back in time and look at what used to be taught. We then need to internalize this ourselves as parents and then teach it to our children ourselves. As an automatic effect, the children will gradually transform the school system with their inquisitiveness. So lets look at the goodies: 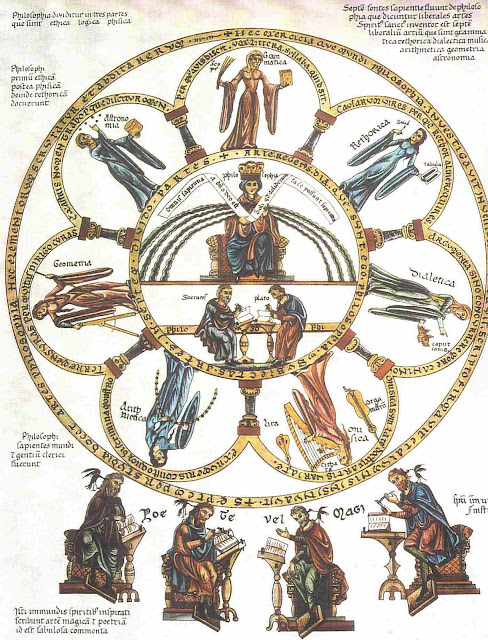 By far the most important thing under the sun is the ability to think for ourselves. You already know how to do this, you say? Careful what you think.... our generation (myself included) have been systematically trained, how not to think by ourselves. We have not learned how to think so we first need to learn again how this is properly done. The most recent system to do this in a proper way was called “the 7 liberal arts” and it was taught in schools from the middle ages until it disappeared about 100-200 years ago. Today it has almost completely vanished, only a useless torso remains, which no longer enlightens our children, but rather dumbs them down for life.

The 7 liberal arts consist of the Trivium and the Quadrivium, they are based on ideas of Plato and Aristoteles and the main intent is to enable people to separate for themselves between fact and fiction. It teaches how to think, rather than what to think.

The Trivium consist of:

The Quadrivium consist of:

The 3-D version of the Star of David (misnomer)

So if you start applying this kind of thinking, you might - sooner or later - stumble across the following controversial opinions (which I personally consider as facts):

-  The Titanic didn’t sink (which ship sunk? Who owned the shipping company? Who died on board?)
-   didn’t discover  (who did? Who was Cristobal Colon?)
-  George Washington wasn’t the first U.S. president and Obama certainly not the first black one (who was? Where was Obama born?)
- All western nations are broke since almost 100 years and have been substituted by corporations (then what is this thing they call “financial crisis” today?)
- Paper money is created by private families (who owns the Fed, the ECB, IMF and the BIS in Switzerland?)
- The planets don’t move “around” the sun (what is the movement of the sun?)
- The Apollo mission didn’t reach the moon (who directed Odysee 2001, when and in which studios, which technology was invented? Why does the boy in the movie "The shining" wear an Apollo sweater?)
- All religions have one common source (how was " called before it was invaded? Who were the Ptolemy family? Who wrote the New Testament?)
- Carbon can`t be a problem for the earth atmosphere (what do you exhale? What do plants use in photosynthesis? What does nature do, when something is out of balance?)

These are just some (intentionally) provocative examples, they are fairly easy to investigate using the Trivium techniques. And remember – your truth may be different than mine, that is perfectly natural. Truth is subjective, not objective. I hope my rhetoric was good enough to make this blog entry of value to you! 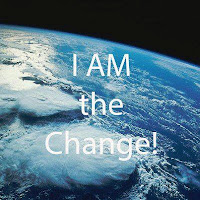 Have fun rediscovering the 7 liberal arts! This planet belongs to you and it is up to you to teach your children, not to some government, priests or "experts"! 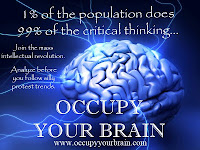 Let´s take back the schools over the next 20 years. If our children ask the right questions, teachers will be forced to re-think. If the teachers think again, they will question the curriculum.

Change must come from the youth, empowered and guided by the adults.