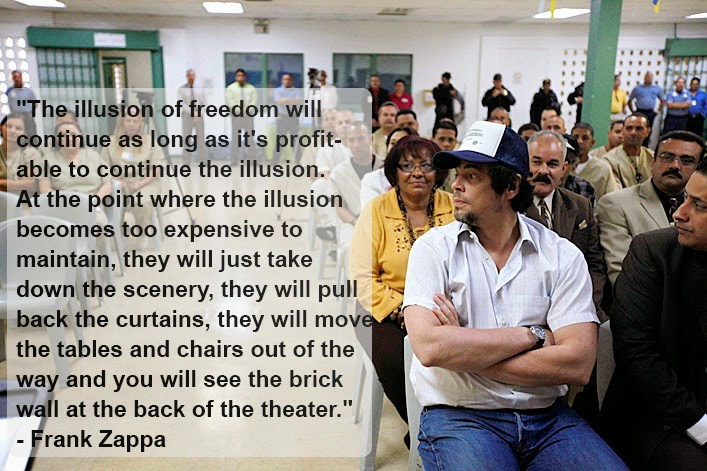 Without going into much boring detail, how Germany was divided, re-educated and subdued into new financial bondage (Marshall Plan, 4 years beginning April 1948), here below an attempt to show the hard wall of the cinema behind the flickering light of the movie screen, the reality that would be seen if the veil would be drawn away of the movie called "Deutschland". I am going to show below that the "German" population is nothing but 80 million stateless objects (legally not human beings, therefore human rights don`t apply). 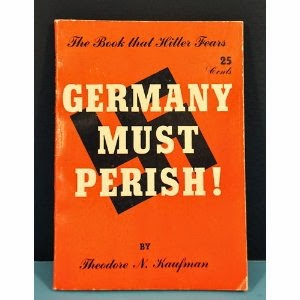 First we put our attention to a book written by Theodore N. Kaufman in 1941, "Germany must perish", which defines a final solution for the German population, once defeated. While there never has been found, in the hundreds of thousands of Nazi document and intercepted messages, a single document that could prove a deliberate plan to kill the Jews in Europe, this book openly discusses sterilization of all German people, and presents a clear number calculation for a planned, outspoken extermination of civilians, the very thing the Nazi leadership has been wrongly accused of having undertaken. Kaufman had close ties to the White House, so this was not just anybody writing some book.

June 21, 1948, the Allies withdrew the old currency and replaced it with the new Deutsche Mark at the rate of 1 new per 10 old. This wiped out 90% of government and private debt, as well as most private savings of the German civil population. It was now time to go back to the Weimar mess.

1949, at the Potsdam Conference, Germany was divided into four military occupation zones and did not regain independence until 1949. In 1949 a new state, West Germany (FRG/ BRD) was created. The three western occupation zones (American, British, and French) were combined into the Federal Republic of Germany (FRG, West Germany), the Eastern part became Soviet and Germany was thus officially divided, the Berlin wall was built in 1961.

Next we direct our attention to another book, written by by Louis Nizer in 1944 for the US Army (see extract above, pdf here), which Roosevelt’s cabinet members received as compulsive reading, and the subsequent president Truman demanded that ‘every American citizen should read this book`. The book deals with the question what should be done with the German civil population after WWII. Aside from extermination, deportations and forced sterilization (weren`t these condemned, evil Nazi methods?) several other options are discussed in this book, option 3) is called "political dismemberment", which is the alternative that was finally chosen. 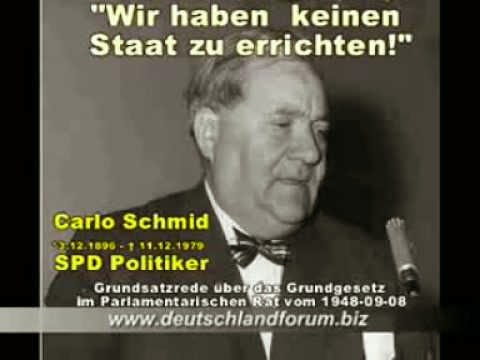 "We don`t have a mandate to create a State!"
founding member of the FRG, Carlo Schmid, 1948

It was decided to grant the Germans an economic wonder (Marshall Plan/ ‘Wirtschaftswunder’) so that they would prosper and live well and be content, but as a price for this they were politically "dismembered" and eternally branded as evil monsters. As a result of this combination, Germans today are economically well off (but middle class disappearing, as in other countries), but most have a broken relationship to their own country, ancestors and no clue about their outstanding, heroic, beautiful history. Berlin appears to be playing a leading role in Europe (e.g. in the current Euro-crisis) but behind the media stage show Germany is a militarily occupied, externally controlled, artificially created, allied-run tax farm. Billions of Euros are extracted from this farm every year and sent to Israel, Brussels and London and who knows to which private pockets. 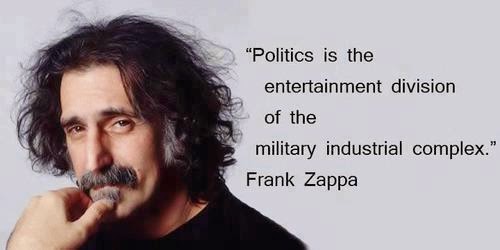 I use Zappa again, it simply could not be put any better

"Deutschland" was created by the Allies as an administration structure, the German post-war government has at all times been an ally-imposed regulatory system. German high politicians have been in on this trick and must be seen as traitors from point of view of the German people; this is true from the very first Chancellor Adenauer, to current Angela Merkel. 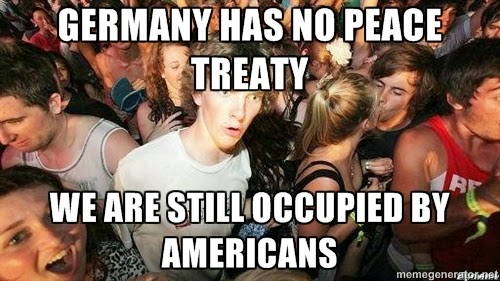 The next legal trick that has been pulled on Germany (and the rest of the world) was to deny the German Reich a peace treaty. Italy and Japan have officially received such peace treaties, but the German Reich until today has not neither been officially resolved, nor has it received a peace treaty and is therefore still officially at war. This also explains how NATO/ USA are able to attack countries like Libya or Iraq without a war declaration. If world war two is still ongoing with Germany, individual war declarations can be legally circumvented. Our hidden leaders always respect the law, this is a very important point, which also points the way to freedom. 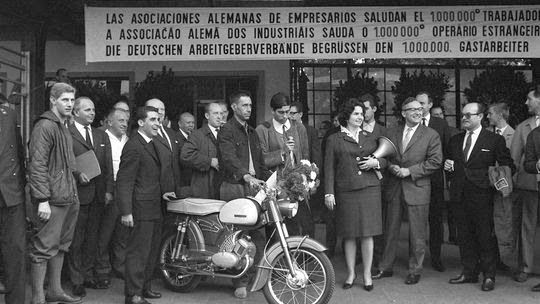 The next step to weaken the German culture and spirit, was to bring in foreigners, a proven strategy already used by the Roman Empire. With a booming economy and short of unskilled workers, especially after the Berlin Wall cut off the steady flow of East Germans, the FRG negotiated migration agreements with Italy (1955), Spain (1960), Greece (1960), and Turkey (1961) that brought in hundreds of thousands of temporary guest workers, called Gastarbeiter. The purpose of this was social engineering. (Note: I am arguing here from a helicopter, social engineering point of view, I am not trying to attack or blame Gastarbeiter families here - in fact I salute them for taking the burden of living as stateless objects along with us in solidarity.) 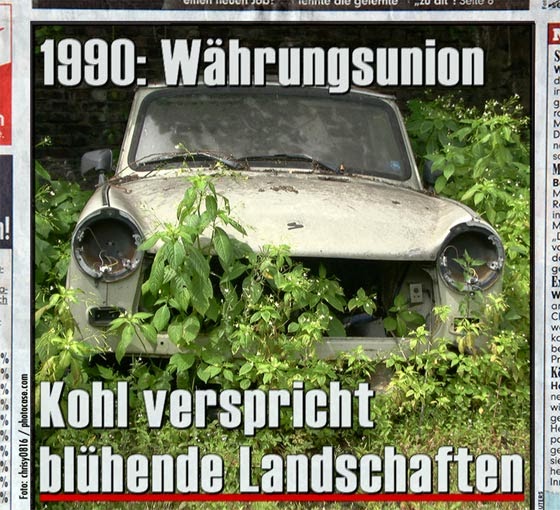 1989, the Soviet Union was shut down, and events led to the German reunification. The way in which the Eastern countries were "integrated" was intentionally destructive. The economy was killed off by immediately introducing the strong German Mark and the Treuhand sold off industrial and state assets at pennies to the Mark to wealthy Westerners, who then dismantled the infrastructure and turned Eastern Germany into an economic wasteland, while politicians were spewing lies about "flourishing landscapes", the bluehende Landschaften of Helmut Kohl, which were never intended. 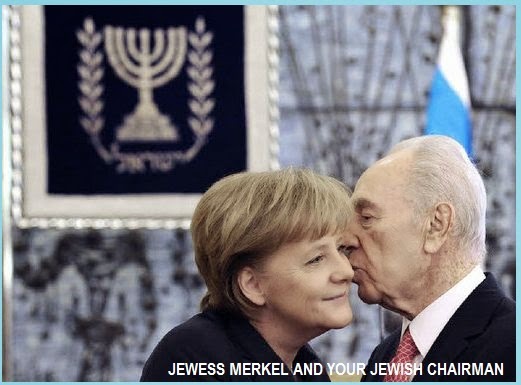 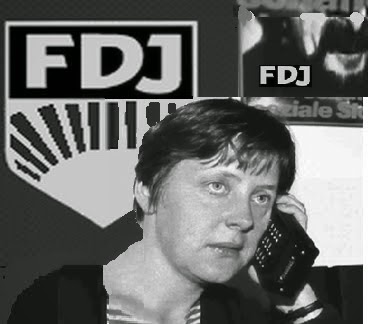 A short bio of Mr. Merkel may help to understand what kind of people are leading Germany and what their true intentions are and who their masters are. Mrs. Merkel is the daughter of the infamous Horst Kasner "Red Kasner" (see here), who was a Marxist, had close ties to the STASI and to Clemens de Maizière, the father of the later last GDR prime minister Lothar de Maizière. Their task was to transform the anti-Marxist GDR Christian church into a "Socialist" church and at the time when everyone else was fleeing from East to West, the Kasner/Merkel family moved from Hamburg to the GDR to convert East German Christians to the Marxist faith. Lothar de Maizière later lifted Merkel as government spokesperson into his cabinet and again later, Thomas de Maiziere was nominated Chancellery Minister under Merkel, so to speak her right hand, responsible for secret services, Verfassungsschutz, BND and integration of Stasi agents. Within the FDJ, Merkel soon covered the highest office, Secretary of Propaganda and Agitation. 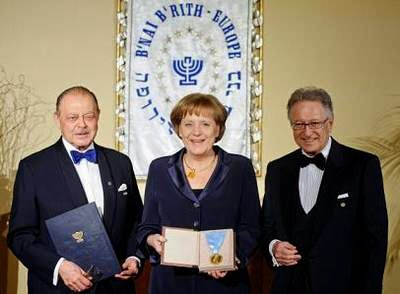 In 2005 Merkel, whose mother was Jewish, which makes her a legitimate Jew, was honored - just like Kohl before her - by the B`nai B`rith. The audience was not only reminded of the longstanding ties between B'nai B'rith in Germany, where as far back as 1882 the first Lodge outside the USA was established, but the audience also learned that the twelve founders of the Order in 1843 in New York were Jewish immigrants from Germany. In the year 1932 the German District counted no less than 13,000 members among more than a hundred lodges, only to be dissolved by the Nazis in 1937. The Nazis dismantled Jewish Freemasonry in total, which they knew was a Judeo-Zionist revolutionary tool.

Maybe one last word about War crimes - the UK in 1991 adopted the War Crimes Act, which is a complete hoax, incompatible with international humanitarian law and designed to protect British and other allied war criminals.

The colonization of German citizens already started with the Nazis, who transformed citizens into foreigners after the Reichstagsbrand in 1934 via the Ermächtigungsgesetz (quasi Martial Law). When this Law came into force, all citizens became indirect (mittelbar) citizens, which means they lost citizenship and became foreigners. From this point in time onward, all matters of citizenship have been under the umbrella of the Immigration authorities (Einwanderungsbehörde) and citizens became colonial/ immigrants - this very procedure is still in place today in Germany and also being adapted by the European Union.

To make it very clear: what they took from we the people was our right of inheritance because prior to 1933 all passports were issued by autonomous States (e.g. Freistaat Baden, Freier Volksstaat Württemberg, Volksstaat Hessen, etc). This means in simple terms, the land was stolen from the people.

In the area of State Law and citizenship we quickly find ourselves deeply entangled in complex Roman RCC/ Talmudic Law and I am going to focus the rest of this blog entry on this aspect, because in my view it is the key to freedom, the only way out. We must either apply "their" laws to themselves, or on individual level adjust our behavior to their occult system (e.g. distinguish our names from us as human beings) and I argue that this is the only way to bring about individual and also collective change. I will write the text in two languages, so German readers may benefit and focus their own research accordingly:

Here some research sources in German language which go into detail and which actually were my source of learning in this area, so all thanks goes to Andreas Clauss for his fantastic research:
- Andreas Clauss, video
- another one by Andreas here
- The German Kaiserhymne here
- Novertis Foundation (I am not associated to this and don`t receive anything for mentioning it here)

WWII was a corporate war !